Trip to the Vegetable Garden of “Oasi Bosco di Vanzago”, a WWF site

From the essay written by Marco C., aged 10.

Today was a special day: I learnt so many things I had never even imagined.

It was 9.30 when our teacher Pina took us out of school to get on the bus that had already been waiting a while. Once we had taken our seats (I was sat next to Davide, of course), the teacher began to explain where we were going.

"Wow, a trip to a forest, Marco!" said Davide, nudging me with his elbow. This time it seemed it would be much more fun than usual.

The teacher also told us that we might see some foxes and we couldn't wait to see them. In actual fact we didn't see any foxes, but we did make some discoveries that left us astonished.

For example, our moustached guide Roberto told us that the waste collected from some local Autogrill restaurants was used to fertilise a vegetable garden of the WWF Vanzago forest.We didn't believe him, but he said: "Follow me and you'll see!".

So we did, and he started explaining all about the history of where we were. If the story about changing waste into fertiliser seemed odd, finding out that 200 years ago, there was a forest around Milan like then one we were looking at right then was simply unbelievable. As we walked, we came across a pond or an animal: Roberto explained all about the ecosystems and had us try to guess the names of the plants. At a certain point, everyone stopped listening, because we saw a young roe deer. Roberto told us that it was just a few days old... but it looked pretty big to me already!

Finally, we reached the vegetable garden... It looked like an ordinary vegetable garden, but Roberto said: "Don't be fooled, this is a vegetable garden just as nature wants it!" I found out that nature gives us everything we need to grow products. Roberto said that this area in the Vanzago WWF Forest is "organically farmed":  this means that they try to use the old traditional farming methods without using any pesticides, disinfectants or other substances that damage the environment.

Of course, even Roberto admitted that this made the work more difficult, and that when the bug season or other parasites come around, they have to be very careful, otherwise they lose their harvest. But it's worth it:it helps safeguard the whole ecosystem. This struck me particularly: looking at the whole system all the time, not considering the individual product. In short, this also means that it isn't possible to eat the same vegetables all the time: in the winter, there aren't any peppers and in the summer there are no cabbages. "I prefer the summer, then!", I said and everyone laughed. Roberto then explained that in order to prevent the parasites from attacking the plants, they use biological “weapons”: basically, other insects that are natural enemies of the organisms damaging the plants.

At a certain point, Alessandro shouted out: "Ok, but where's the waste? I can't see it; I can only see earth".So Roberto told us about "compost", a natural fertiliser obtained from food waste that is collected in three local Autogrill restaurants. He pointed to a small hill, from which a little smoke could be seen to be coming from the top: it looked like soil or earth, but in actual fact it was decomposing waste.

"So it means that when I leave something on my plate at Autogrill, it ends up here?" Luisa asked. "That's right. And we use it to grow other food: nothing goes to waste", Roberto answered. "So I'm no good... I always eat everything", Francesco said. And we all laughed... 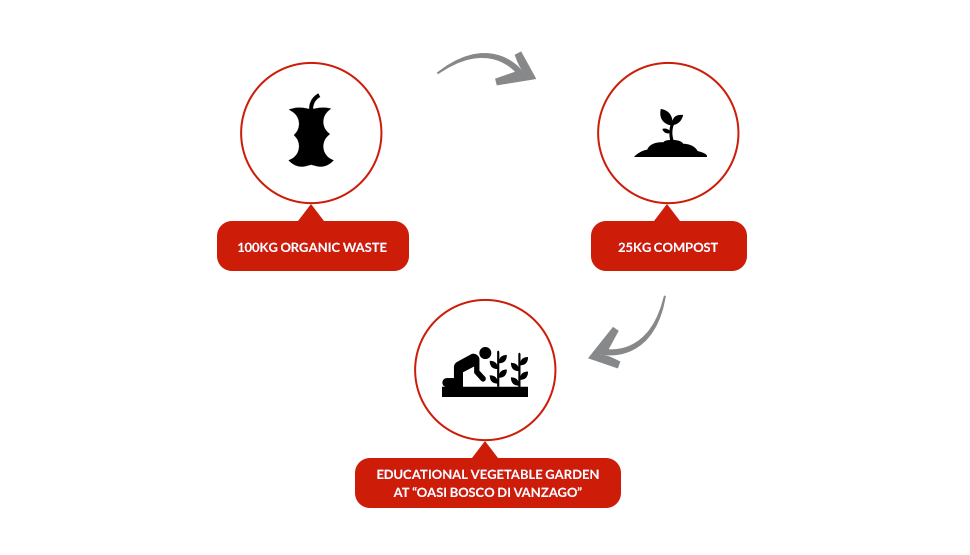 Autogrill and WWF Italy have teamed up to develop an experimental integrated supply chain project to reduce food waste at the WWF site “OASI Bosco di Vanzago”. The initiative, which is part of the One Planet Food programme, involves the collection of organic waste generated at the Villoresi Est, Brianza Nord and Brianza Sud Autogrill restaurants and its transformation into compost to "feed" the educational vegetable garden of the Vanzago site. Autogrill is collaborating with WWF Italy as part of Afuture, the Company’s project focusing on best practices in sustainability which has led to the definition of a 2012-2015 Sustainability Roadmap, a strategic reference guideline for the whole Group to integrate sustainability across business operations.