A revolutionary garden, the courage to innovate and an endless restaurant: the airport where diners fly high.

Anyone asking him his name receives the reply: “My name is Charles Tim Tian Li. Friends have always called me just Li. They don’t care if it’s a surname”. After a smile, he usually adds, “I don’t care anymore either, I’m used to it by now”. After that, he feels obliged to point out that Tian is his grandfather’s name, the first member of his family to come to the United States, whereas he was born and raised in Chicago.
Every time he thinks about the history of his family and the fact that he is a cook at Wicker Park at Chicago airport, he feels like a perfect child of his times: he comes from the world and always has the world under his very nose. 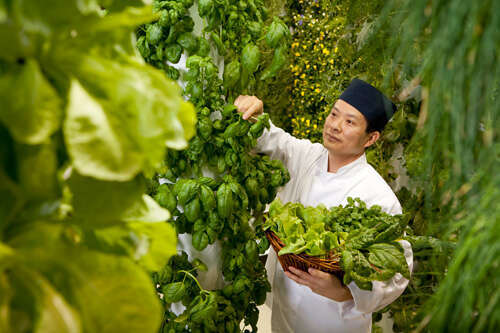 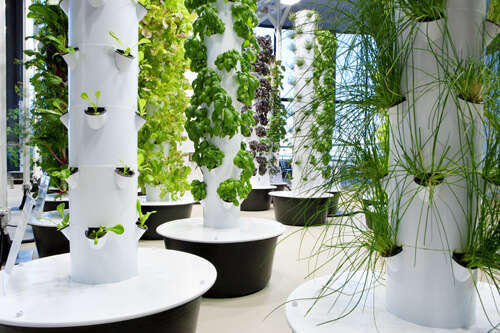 Everyone glances in as they go past, so I look at them. I think that – from outside – what I do must appear a bit strange, a little man dressed as a cook walking round and round, with a basket in his hand, between all these columns sprouting plants. The most amazed are children – they hold back and point at me, while their mums pull them by the wrist, three paces ahead: “Mum, look, looook…”

The result of collaboration between HMSHost and the Chicago Department of Aviation, the Urban Garden is a pioneer experiment in the field of environmental sustainability. Located in Terminal 3, it is an aeroponic garden (where the plants are cultivated with their roots suspended in air, sprayed at intervals with nutrients) comprising 26 towers on which over 44 species of plants are grown (including beet, sweet basil, a mix of gourmet lettuce, habanero chili peppers, edible violets, thyme, oregano, green peppers and sweet peas). Vegetables, herbs and edible flowers are cultivated for use in the HMSHost sales points at the airport, ensuring a constant supply of fresh, quality products with a 0km production chain.

Charles adores his job, “I can’t tell you how wonderful it is to go home with your hands smelling of basil”. This is how he tells it, but his day-to-day is by no means banal: his restaurant, the Wicker Park, is one of those that - of the over 70 present – uses ingredients from the aeroponic Urban Garden in the airport.

“Every now and again, I choose to go into the Urban Garden myself. I wander among the towers and pick some of the ingredients I need. I feel like an astronaut”, jokes Charles, even if he is not so far from the truth. The garden in effect is the result of research that also involved NASA, based on a growing technology that does not require soil.

With a strong symbolic impact, this aeroponic garden project was set up to increase the sustainability of the airport (vegetables and herbs at 0 km used in some of the airport restaurants), but it also adds pleasure to the taste on the plate.

“The flavour of our dishes – just like the specialities prepared in the other restaurants that use the garden, like the O’Hare Bar and Grille – are enhanced because the food is fresher, it loses none of its properties as it comes from just around the corner”, this is another of Charles’ sayings that his friends know off by heart.

A window on the tastes of the world 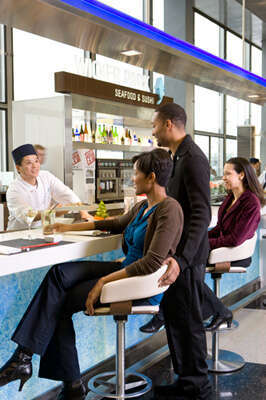 More than 66 million people a year come through Chicago O’Hare airport, so working in one of its restaurants means always having a window open on the tastes of the world: this thought makes Charles particularly proud.

“I don’t just make sushi, I offer people an interval of taste in their lives”, he often says. Also thanks to his motivation, a few years ago, the Wicker Park won the title of best restaurant in the world in its category. Due also to the philosophy of the place: a high-quality sushi bar where the kitchen uses fresh and selected ingredients.

“My grandfather was not a cook, but he loved cooking. He always said: “We are what we eat, but mainly we are what we cook”. Maybe this is why I feel good when I go home with my hands smelling of basil, because I feel I have done something well”. The words of Charles Tim Tian Li. Li to his friends.

Since 1998, Autogrill is the main food service operator at the airport. With more than 80 managed sales points, the Group has made a definite contribution in turning the Chicago O’Hare into a top-class hub in airport catering, as shown by the various awards received for the food served at the airport.

Restaurants that have received international awards in recent years include: