Bistrot Fiorenzuola d'Arda: eight local products not to be missed

Eight local specialties from the first-rate local wine and food tradition can be enjoyed at Autogrill's Fiorenzuola d'Arda Bistrot.

First in Europe for the quantity of PDO (Protected Designation of Origin) and PGI (Protected Geographical Indication) products, Emilia Romagna owes part of its charm and tourist appeal to its excellent and well-established local culinary traditions. The flavors of Emilia are at the heart of what Autogrill's new Fiorenzuola d'Arda Bistrot, located right inside the famous bridge style restaurant that intersects the Autostrada del Sole, has to offer. In line with the philosophy of the Bistrot concept, promoting genuineness and the short chain, Autogrill has selected, with the collaboration of the University of Gastronomic Sciences in Pollenzo, producers who represent the excellence of the territory, to provide the best traditional products to offer to travelers.

Mariola Cruda Piacentina is a raw sausage made of pork, one of the traditional cold cuts of the province of Piacenza and in particular the upper Nure Valley. The Fiorenzuola d'Arda Bistrot is supplied by Fratelli Salini, the only producer who still makes it in the traditional way and recognized by the Slow Food Presidium. 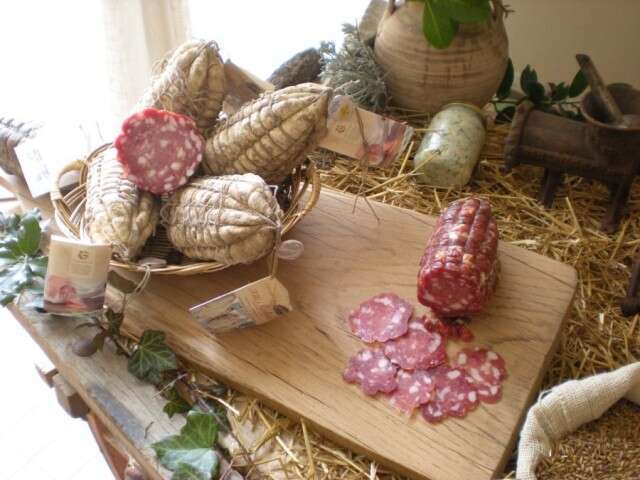 Mariola is a product of excellence made using the noblest cuts of pork including the haunches, which, in the hills and mountains of Piacenza, were not traditionally used in the preparation of hams. The fine mixture with generous pieces of white lard, flavored with garlic and a little white wine, is  made into salami and cured for six to twelve months. When properly aged, a slice of Mariola should ooze a drop of liquid when cut, a sign of great quality for salami with a long maturing period.

Parmigiano Reggiano PDO is a hard cheese made from raw cow's milk, matured for a period ideally lasting between 24 and 90 months. It's a cheese with a full tasty flavor, easy to digest and extremely rich from a nutritional point of view. At the Fiorenzuola d'Arda Bistrot we serve Parmareggio parmigiano, the leading producer of this cheese in Italy. The production area includes the provinces of Parma, Reggio Emilia, Modena, Bologna west of the Reno River and Mantova south of the river Po, the same area in which the story of its production began back in the twelfth century. For lovers of culinary curiosities, Parmigiano Reggiano is mentioned in the famous book Treasure Island by R. L. Stevenson where one of the characters, Doctor Livesey, preserves a piece in a silver snuff box.

Traditional Balsamic Vinegar from Modena PDO: first mentioned in a Ducal register in 1747
Traditional Balsamic Vinegar is produced with cooked must of grapes originating exclusively from the provinces of Modena and Reggio Emilia, fermented, acetified and then aged for at least twelve years.The flavor is sweet and sour at the same time, well-balanced with a good acidity and a light aroma given by the wood used in the aging barrels. Arda uses Acetaia Bellei's product, which boasts a centuries-old tradition. 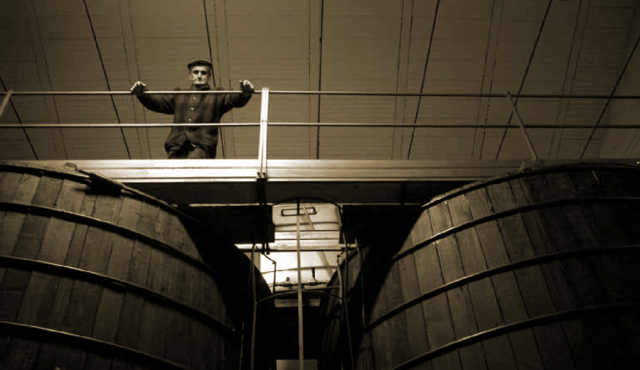 A photo from the Acetaia Bellei Archives

Although the ancient Romans used to reduce grape musts to obtain seasoning, the first written evidence is found in the poem Vita Mathildis, composed by the Benedictine monk, Donizone, at the beginning of the twelfth century.The term balsamic appeared for the first time in a Ducal register in Modena in 1747, but it had already been known to, and appreciated by the local aristocracy for centuries. It was not, however, until the nineteenth century that it spread across both regional and Italian borders.

Coppa Piacentina PDO: a product with a family tradition passed down through the centuries

Coppa Piacentina PDO is a cold cut produced all over Piacenza, but the aging process must take place below 900 meters above sea level, in places like San Giorgio Piacentino, where the Salumificio Giordano is found and where the Coppa you can enjoy at Fiorenzuola Arda Bistrot is made.

Coppa Piacentina is obtained from the neck muscles of heavy pigs born, raised and slaughtered in Emilia Romagna and Lombardia: the meat is dry salted by hand, rolled in salt and spices, then encased in a natural skin, tied, dried, pre-seasoned and finally matured in a cool, humid underground cellar, for a minimum period of six months.

Coppa stands out among salami for its full sweet taste and its delicate and subtle aroma.

Tortelli alla piacentina are tortelli made with egg pasta stuffed with a filling of ricotta, spinach, Grana Padano, nutmeg, eggs and salt. A typical dish of the city of Piacenza, it originated as a meat-free alternative for Catholic holy days when it was forbidden to eat meat. 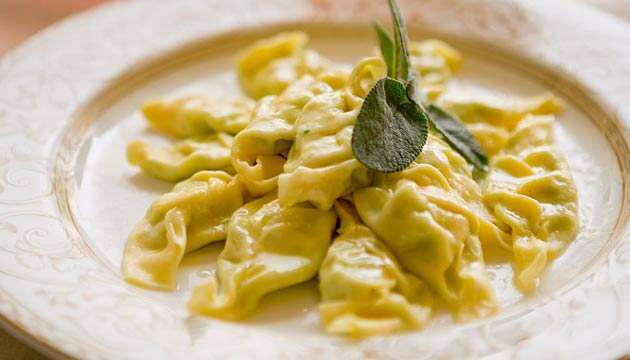 Legend has it that the typical shape of wrapped candy originated back in 1351 when Bernardo Anguissol, a nobleman from Piacenza, hosted Francesco Petrarca in his castle in Vigolzone and requested that the shape of be changed to make the tortelli more visually pleasing to the eyes of the refined poet. Today they are still produced by hand with the same shape by the Pastificio Fontana, who supply them every day to our Fiorenzuola d'Arda Bistrot.

Prosciutto di Parma PDO: the importance of the land of origin

Prosciutto di Parma PDO is the cured ham entirely produced and worked in a well-defined area known as the Terre Matildiche that lies between the Via Emilia and the bed of the river Enza. It's production, strictly regulated by the 'Consorzio dei produttori' (Consortium of producers), starts out using the rear haunches of a pig of a good weight, lightly salted to maintain its sweetness and then naturally cured, thanks to the ideal climatic conditions of the area, for a minimum of one year.

The tradition of making cured ham in Parma goes back to ancient times, mentioned by the Roman author Varrone in the first century BC, and has been favored over the centuries by the presence of salt beds in the area which provided the salt required despite the distance from the sea. The term prosciutto probably derives from the Latin "perex suctum", meaning dried, referring to the action of the salt on the meat. At Bistrot Fiorenzuola d’Arda, the Prosciutto di Parma PDO is Fratelli Boschi’s one.

Felino Salami PGI: a product with a distinctive taste

The PGI salami made by Felino is produced in the town of the same name, and the surrounding towns. When sliced it has a deep red color spotted with white pieces of lard, it has an intense aroma and a delicate flavor.

Traditionally it is cut diagonally to provide oval shaped slices, which should be as thick as a peppercorn. Felino salami is produced with pure pork meat with salt and whole peppercorns, to which crushed garlic and pepper dissolved in dry white wine is added.

After stuffing, the sausage is aged for at least two months, operation facilitated here too by the ideal microclimate of the production area. The Fiorenzuola d'Arda Bistrot is supplied by Cavalier Umberto Boschi of Parma.

Lambrusco COD: an antique vine with a sparkling soul

The Lambrusco family of vines is large and produces the sparkling wines and spumante of the same name, both red and rosé.

There are different COD (Controlled Origin Denomination) and TGI (Typical Geographical Indication) specifications for Lambrusco: at the Fiorenzuola Arda Bistrot you will find that produced by the Chiarli family with the Sorbara and Grasparossa COD varieties, among the finest, yielding a light wine with fruity aromas. 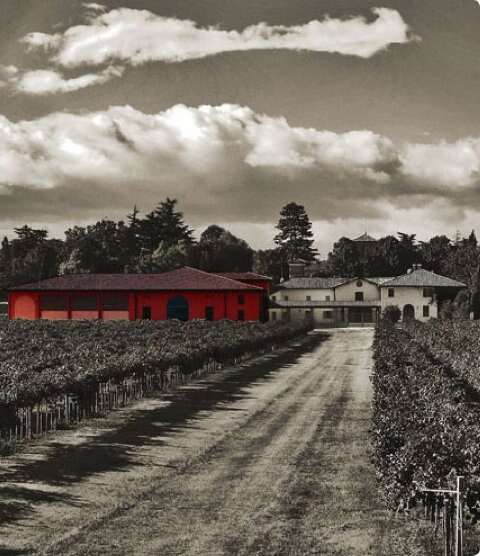 Among the vines of Cleto Chiarli

The etymology of the name comes from the Latin words labrum, meaning field margin, and ruscum, meaning wild plant, and it appears in the writings of the Roman poet Virgil, a native of Mantova. The Lambrusco grape varieties are in fact native of lower Lombardia and Emilia, and are perhaps the oldest in Europe. Our journey among the typical products of Emilia ends here: all you have to do now is come and visit the Fiorenzuola Arda Bistrot to taste them for yourself!

Autogrill is the world’s leading provider of food & beverage services for travellers.
The Group is present in 30 countries with more than 60.000 employees and manages about 4.000 points of sale in around 1.000 locations.
Autogrill serves people on the move and operates primarily under concession agreements.
The Group operates mainly in airports and motorways, followed by railway stations and a selective presence in high street, shopping centres, trade fairs, museums, and other cultural facilities.