New openings in Europe and the Middle East

Autogrill (Milano: AGL IM) announces the extension of the partnership with  Leon, the English brand known for “Naturally fast food” which has made fast&healthy its mission.

The new agreement signed by Autogrill and Leon capitalizes on the experience of the subsidiary HMSHost International, which already manages nine Leon locations in the UK and the Netherlands. The agreement calls for the opening of new locations in railway stations and airports in the main European countries and the Middle East, with an exclusive for both channels in the UK, Belgium, Germany, Switzerland, Denmark, Finland, Norway and the Netherlands and an exclusive solely for the airport channel in the United Arab Emirates, Bahrain, Saudi Arabia, Kuwait, Turkey, France and Spain. 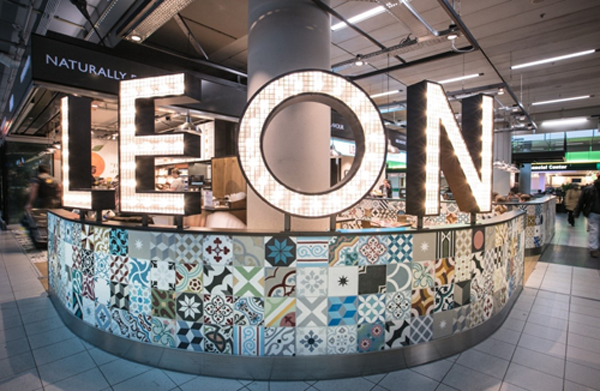 Thanks to these new openings an increasing number of travellers, not only in Europe, will be able to enjoy Leon’s quality Mediterranean cooking, as well as be engaged by its sophisticated, minimalist design.

“We are happy to begin this important development path together with Leon.  Autogrill and Leon share a vocation for innovation, as well as the ability to listen and understand customers’ needs and anticipate trends. Today Leon, thanks to the strength of its brand which goes well beyond the UK borders, is now a full-fledged member of the Group’s portfolio of more than 300 brands” stated Ezio Balarini, Autogrill’s Chief Marketing Officer.

“In 2016 the LEON at Heathrow’s Terminal 2 received the ‘Fast Food/Quick Service Restaurant (QSR) of the Year’ award during the FAB AWARDS, which shows that bringing people food which tastes good and does them good, is more than welcome for busy travellers. I am proud of our partnership with Autogrill Group, they are our extended family and we are very happy to be opening in more places, to serve more people, in partnership with them” commented LEON founder John Vincent.

Founded by John Vincent and Henry Dimbleby in the UK in 2004, recently awarded Best New UK Restaurant by the British newspaper The Observer, Leon has revolutionized the concept of fast food, by successfully combining a focus on healthy and natural foods, based on fresh and organic ingredients, with the ability to meet people’s quick break needs dictated by the pace of modern life.

The menu is inspired by the ingredients of Mediterranean cuisine, reworked with a gourmet twist, based on fruits and vegetables, whole grains, seeds and unrefined cereals. Leon is a member of the Sustainable Restaurant Association which promotes sustainable and ethical conduct, thanks also to partnerships with local producers.

In its native UK, Leon operates in some of the best known and most glamourous parts of the capital – from South Kensington to High Holborn, from Carnaby Street to Regent Street, from Cannon Street to Victoria Street – as well as the King’s Cross Station and the Heathrow International Airport. The Leon at Heathrow’s Terminal 2, operated by the subsidiary HMSHost International, received the ‘Fast Food/Quick Service Restaurant (QSR) of the Year’ award during the FAB AWARDS 2016, the international travel f&b Oscars organized by trade magazine “The Moodie Report” .